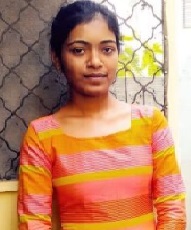 Ever since she took admission in college, Pooja’s family was hell-bent on getting her married. Her father, an alcoholic, had already given up on her education and was adamant that she be married after completing her schooling.

However, it was her resolve and aspiration to do something in life that motivated Pooja to fight for herself. She says that arguments and fights were a regular occurrence in her house because of her situation.

“When I was first contacted by YDF team, it felt like someone had appeared to take away all my burdens. If that did not happen, I would have been married by now and living with my husband,” she says. After getting to know about the scholarship, she managed to convince her father to let her continue studying.

20-year-old Pooja has an elder brother and a younger sister, both of whom are currently studying. The money that her father earns from farming is not enough to sustain the family of five and therefore, Pooja and her brother work during their spare time to fund their own education.

While her brother works at a nearby company, she takes classes at a coaching centre from which she only gets Rs 1,000 a month. For Pooja, this amount is too little to support her studies and with all the pressure from her family, it adds to all the stress. Now, she is hopeful that the scholarship amount will help her with focusing entirely on her studies and getting good marks in the final year of college. She wishes to prepare for MPSC and become an administrative officer. For now, the scholarship amount has taken away one of her biggest impediments, i.e. the possibility of being forced into marriage.